Play the king of poker games for free at Replay Poker. You’ve likely seen the superstar players on television battling it out for millions of dollars in prizes. The game took the world by storm when Chris Moneymaker, an accountant from Nashville, Tennessee won the World Series of Poker in 2003 for $2.5 million after bagging his entry via an online poker tournament.

Since then, Texas Hold’em has become popular in every part of the world, with players enjoying trying out the many different strategies and relishing the excitement the game brings. Replay Poker lets you play for free Texas Hold’em games against other recreational players in a fun environment.

You can take part in our numerous free Texas Hold’em ring games or enter our popular tournaments which start around the clock. Climb the leaderboards and unlock achievement badges as you build your bankroll, increase your skill and become active in our community. It’s simple to sign up and start playing today.

How to play Texas Hold’em 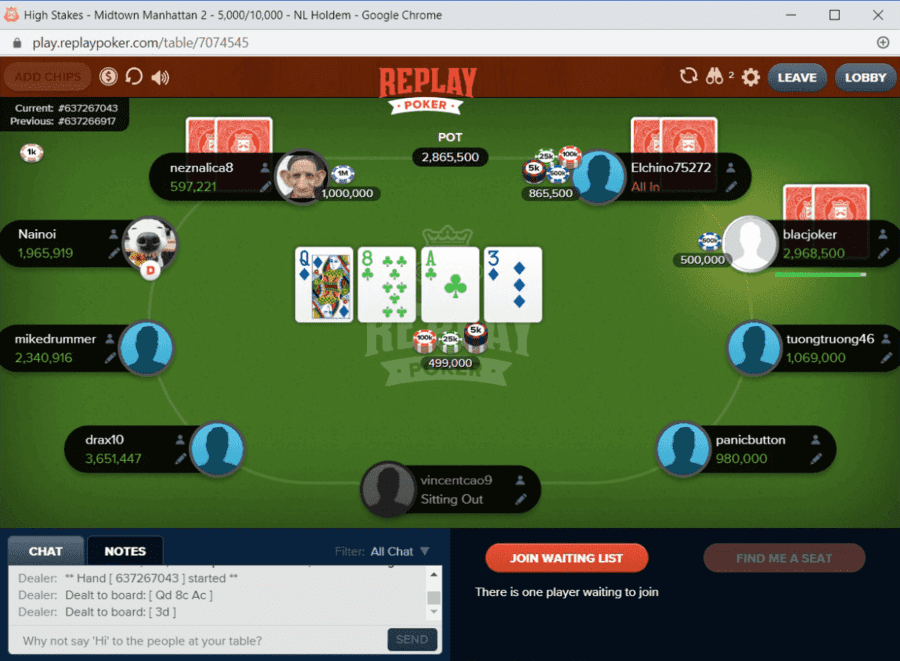 Learning how to play Texas Hold’em games is easy enough but mastering them is another thing altogether. There are so many strategies you can adopt to improve your game and help you narrow down what your opponents are up to.

While it’s true there is a large slice of short-term luck in the game, the skill element means the better Texas Hold’em game players will be the winners in the long run.

The basic rules are that each player is dealt two cards that only they can see, called hole cards. Then, up to five cards are dealt face-up in the middle of the table, called community cards. First, three are dealt, called the flop, then one more, called the turn, and finally the river card.

It’s up to each player to make the best poker hand they can from any combination of their own two cards and the five community cards. See poker hand rankings for more information.

But of course, things are never that simple. There is a round of betting after the hole cards are dealt and also after the flop, turn and river. This means you don’t need to have the best hand to win – you can put pressure on other players by betting and forcing them to fold.

But don’t do this too often, because one of them might call your bluff and call you. If more than one player remains in the hand at the end, there is a showdown where all cards are revealed, and the player with the best poker hand wins.

To ensure there is always a pot to play for, at the start of each round, players take it in turns to post a mandatory small blind and big blind.

In No-Limit Texas Hold’em you can bet as many chips as you have in front of you, so you can win or lose everything literally at the turn of a card. This is why the game can be so exciting to watch and play.

The skill part of the game is understanding the strength of your hole cards and folding or betting accordingly as the flop, turn and river are dealt. You might bet because you are chasing a flush or a straight and understand how likely it is that the turn or river might be a card of the suit or value that you need to make your hand.

While this might sound a little confusing to Texas Hold’em game beginners, don’t worry because there are plenty of books or websites devoted to improving your poker strategy. And the great thing about Replay Poker is that it’s free to play, so losing while you learn won’t cost you a cent.

No Limit Texas Hold’em is by far the most popular variant of the game. It’s what you’ll see on TV and the game most people like to play online at Replay Poker. At a ring game, there is a limit to how many chips you can sit down with.

From then on you can bet as much as you want on any single hand. If you lose all or some of your chips, you can take more from your account and put them on the table. In a tournament, everyone starts with the same number of chips.

But while you can bet them all on one hand, you’re out of the tournament if you lose them (unless it’s specified as a rebuy tournament, in which case you pay the entry fee again and receive another stack of starting chips). No Limit is edge-of-your-seat stuff, with big swings possible.

To make things less frantic than No Limit, Mixed Limit restricts the size of bets you can make until after the flop is dealt. On the subsequent betting rounds, it’s anything goes!

In Fixed Limit your bet size is restricted throughout the course of the hand. While this is inherently less risky, it does mean more players are likely to stick around for the duration of the hand, meaning you often must beat more players to win.

Play poker to win and see how you match up to the competition in our weekly or monthly leaderboards. Our free Texas Hold’em poker game Sit’N’Go, multi-table tournaments and ring games have leaderboards to tackle. There are bonus chips on offer for the leaders. Watch out for special promotions, also offering free bonus chips.

You might think Texas Hold’em is a little daunting to learn when you’re starting out. But there’s lots of help, our blog or visit our forum or social media channels. There’s a lot of fun discussions, making sure it’s never been so enjoyable to part in a Texas Hold’em poker free game.

How To Play Poker

How to play Texas Holdem